SHIFTboston blog» Blog Archive » The Psychiatric Infrastructure of the City

The Psychiatric Infrastructure of the City

A few years ago, the Boston Globe looked at what could be called the psychiatric impact of that city’s Big Dig. The Big Dig was a massively expensive urban engineering project that put ‘s Central Artery underground, freeing up space on the earth’s surface for parks and businesses. 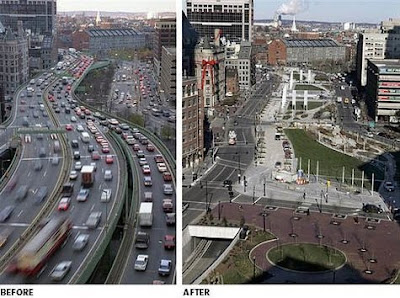 
In the short term, mental health experts say, tempers may flare as the public deals with the logistical inconvenience of detours, lingering uncertainty about the safety of the tunnels, and mounting cynicism about the project. And there may be long-term effects as well – ones that could subtly reshape the city’s identity.

A new tunnel, say, is being dug between and , and so moods in the city begin to change. Psychiatrists notice a strange surge in patients; people come in complaining of nightmares of forced reunion, being in the same room again with an annoying relative they thought they’d left long ago behind. Homeowners wake up at 3am each night, convinced someone’s trying to break into the basement. The whole island is ill at ease. And it’s all because of that new tunnel getting closer and closer to completion.

Or, say, a new flood barrier is under construction outside – a gleaming wall of metal that will rise from the tidal murk. Would it change the dreams of city residents? Would this distant piece of hydro-infrastructure affect how Londoners feel about their city – or about themselves? A new confidence. Dreams of survival. Psychoanalysts report that no one dreams of drowning anymore.

On one level here, the answers are both uninteresting and obvious: of course, these sorts of projects would affect the dreams, thoughts, and nightmares of a city’s residents – after all, those new landmarks would be a part of the world these people live within. But a less obvious, or less easily tracked, impact might be postulated here – that, say, a new bridge between San Francisco and Oakland might subtly change how San Franciscans think about their peninsular city, and that this only becomes obvious in retrospect, when someone notices that prescription rates have changed or the divorce rate has plummeted. It was the psychiatric implication of a new bridge that did it.

Put another way, if a new highway can have a measurable, and easily detected, impact on a city’s economic health and administrative well-being, then could a new highway – or bridge, or tunnel, or flood wall, or, for that matter, sewage treatment plant – have a detectable impact on the city’s mental health? After all, these sorts of massive public works “may carry a psychological burden,” It’s the psychiatric infrastructure of the city.

Categories: Urban Ecology
Tags: Boston, Mobility, Urban design
You can follow any responses to this entry through the RSS 2.0 feed.