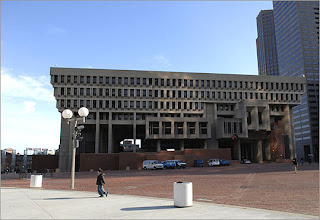 The Boston Society of Architects’ annual Rotch design competition, a sort of American Idol for young architects, issued a topical challenge to contestants this year: Transform Boston’s much-maligned City Hall into an inviting public space.
The winner – Christopher Shusta, a Harvard University Graduate School of Design Alumnus – netted a $37,000 scholarship to travel the world studying architecture for at least eight months. Take a look at his proposal and the proposals of five other finalists, and then vote for your favorite design at the end.
With plans to renovate City Hall currently in limbo, these designs are all hypothetical for now. 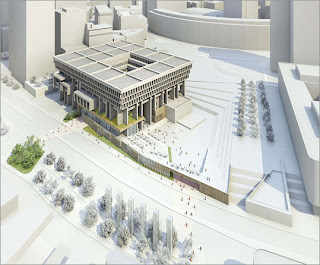 This project aims to restore the City Hall building’s openness to the public by making the building more pedestrian-friendly at street level. 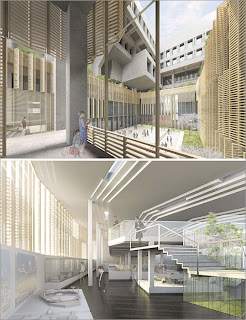 On the Congress Street side, the design aims to catch the interest of passing pedestrians with a “storefront glimpse” of historical exhibitions within.
At the northern edge of the site, the upper terraces create a pedestrian bridge and outdoor café space. 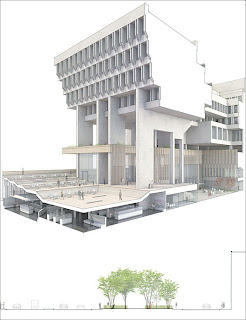 The area is not overly grand in scale, but is meant to offer “spectacular views” of the plaza stage and the Holocaust Memorial Park across Congress Street.


The existing building’s interior courtyard is expanded and carved through to the lowest level, bringing in daylight and allowing museum events to spill outside during good weather. 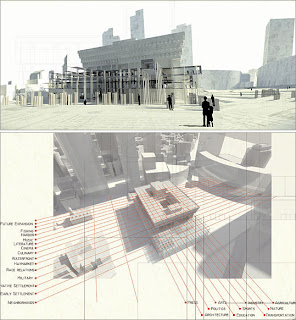 In this design, the new museum enclosure would be as light as possible to counter the enormous mass of the existing City Hall building. 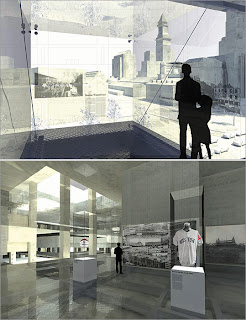 Using the existing concrete columns as a conceptual starting point, columns made of steel angles would reflect an inverted version of the existing building’s structure.

The idea behind this museum is to create a matrix of historical events, organized around themes rather than chronological order. This would the museum easily expand and change exhibits. 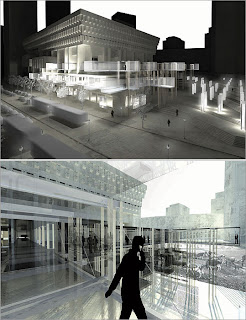 In this museum, galleries would extend into walkways “like fingers into the city.” If possible, the contents of the museum images, text, and objects would be placed with views of locations relevant to the artifacts – the same strategy used in the Freedom Trail.

Design by: Andrew Steingiser of Malden 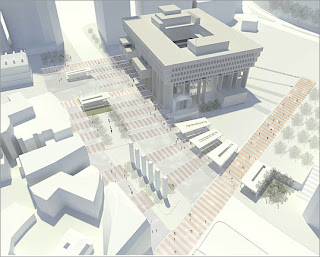 This design aims to accomplish Italian architect Aldo Rossi’s vision of urban architecture: Architecture that defines a particular place, with the potential to develop “in both space and time”. 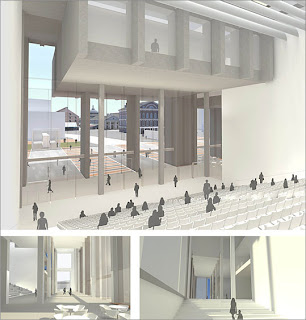 Its goal is a City Hall space that can evolve to accommodate multiple functions.

This design does away with the three-story brick mass in front of the building, opening up the space and making it more accessible. 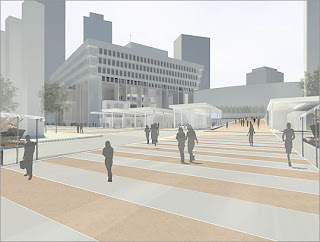 The design extends a series of pavilions along and across Congress Street with pavilions to reinforce the existing plaza and street front. 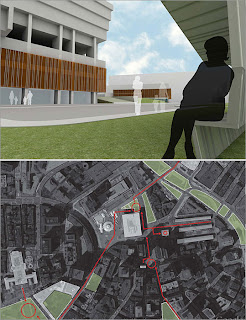 This design retools the City Hall facade to create a more active front that jibes with the activity of Haymarket and Faneuil Hall across Congress Street. 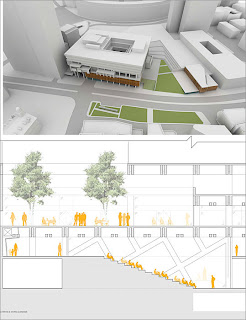 The Boston History Museum’s public zones, galleries, meeting rooms, auditorium and bookstore are all located along the façade.

An outdoor cafe is aligned with Hanover Street to provide a sense of continuity .The cafe area and MBTA stop create a connection between the private functions and the public realm of City Hall.
The main hall or lobby, when approached from Congress Street, acts as an indoor public plaza, accessible at any time. It creates a backdrop that highlights City Hall’s unique structure, while also opening views to the floors above through a stepped auditorium and grand staircase.

Design by: Eric Weyant of Concord 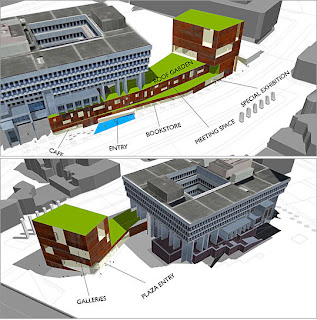 This design adds a low-rise tower to the site along Congress Street.The museum’s galleries occupy the floors of the tower, with the uppermost gallery spilling onto a roof garden. 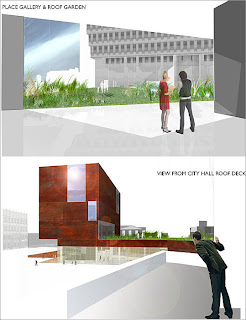 The galleries in the tower have large shifting planes of glass allowing for unique perspectives from Faneuil Hall to Cambridge Street. The material of the museum is a play on the worn, chipped brick of the Freedom Trail. 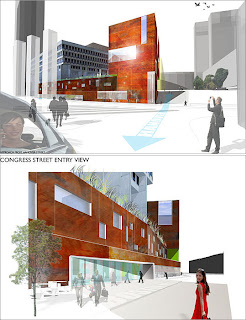 The Congress Street edge is lined with public activities like a cafe and bookstore. Inside City Hall, a lecture hall and theater below support upper-level office and staff space.

Design by: Karen Blanchard of Philadelphia 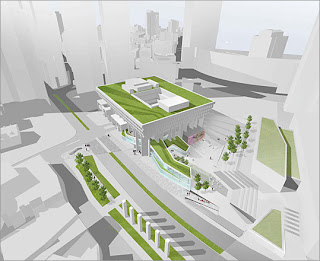 This design aims to bring social activity back to the currently businesslike City Hall plaza. The north end of the plaza becomes dedicated to the museum, which weaves itself into the existing City Hall. 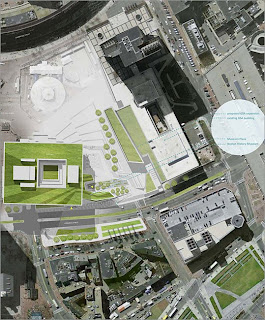 A small entry plaza that feeds the museum entrance, a bookstore and a cafe.

The museum also has an entrance off Congress Street that is recognizable from nearby attractions of Faneuil Hall and Quincy Market. 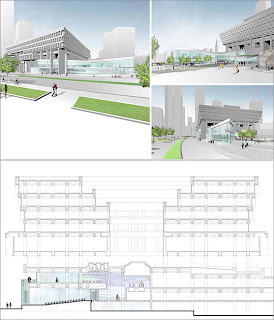 The large number of steps off Congress Street are balanced out by a ramp that invites visitors to the museum plaza. The glassy museum advertises itself through transparency.

Categories: Sustainability, Urban Ecology
Tags: Boston, Innovation, Urban Planning
You can follow any responses to this entry through the RSS 2.0 feed.