To provide more inspiration for the BARGE2011 Competition here are some innovative kinetic art designs and recent installations. Taking from the scientific definition of kinetics, kinetic art is art that moves. Kinetic art can come in many different forms such as, sculptures, mobiles, and drawings. These moveable art pieces typically generate their movement from natural forces like the wind or water, but they can also be generated by a motor or pushed, pulled, or turned by a viewer.

Kinetic art and design was first experimented by avant-garde artists during the early 20th century, but it did not gain popularity until the 1950s and 1960s. Artists like, Alexander Calder and Yaacov Agam helped to pave the way for kinetic art design to be an accepted art form.

Alexander Calder is attributed with inventing the mobile. His mobiles and sculptures can be found all over the world. Calder derived his inspiration for mobiles from his fascination with creating kinetic sculptures with wire that moved by harnessing the wind. The Addison Gallery of Art at Phillips Academy in Andover, MA is home to, “Horizontal Spines.” Calder created this free standing mobile sculpture out of sheet metal and wire. The base of the sculpture forms the platform for thin metal arm like wires that bounce when touched. 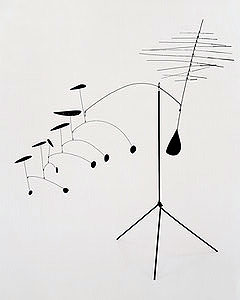 Following in the footsteps of Calder, artist Susumu Shingu created the, “Gift of the Wind,” at the Porter Square T stop in Cambridge, MA. Commissioned by the MBTA in 1983, this mobile like structure stands against the brown backdrop of the city. Its three massive, reddish sails and supported by a tall white post. The sails twist, turn, and spin in a circle around the top of the post. The degree of which the sails move depends of the wind’s force. 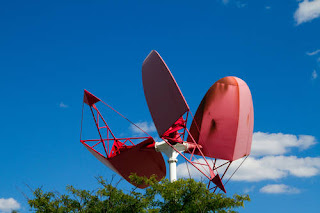 Artist Yaacov Agam, is also a highly recognized kinetic artist. He is most noted for creating kinetic fountains in public spaces such as Paris and Tel Aviv. His fountain in Dizengoff Square in Tel Aviv is what he calls a, “fire-water fountain.” Five, rainbow circular tiers sit in the middle of the fountain and spin from the movement of the fountain spurts. Every 20 minutes, the Fire-Water fountain plays music, spins, and shoots out random bursts of fire. Agam is also renowned for his paintings of images that appear to change shape depending on how the viewer looks at them.

Not all kinetic installations rely on vision. The “Sea Organ” in Zadar, Croatia relies on sound and wave power. The Sea Organ was designed by architect Nikola Basic in an attempt to redevelop the city‘s waterfront. At first glance, “Sea Organ” looks like ordinary steps leading down into the sea. But, within each marble step is a perfectly tuned organ pipe that creates music as the tides ebb and flow. There are a total of 35 musically tuned organ pipes within the stairs. The volume and pitch of their tones vary depending on the strength of the wind and the waves. 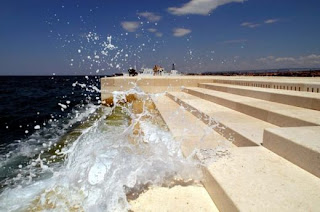 Kinetic art can be functional as well an art piece, but can it be used as a green energy source? We’ll leave that part up to you and your designs for the BARGE 2011 Design Competition! We hope this got your creative juices flowing. We look forward to your submissions!

Categories: Art/Fun
Tags: Landscape Design, Public space, Sensory, Sustainable
You can follow any responses to this entry through the RSS 2.0 feed.

One Response to “Kinetic Art and Design”