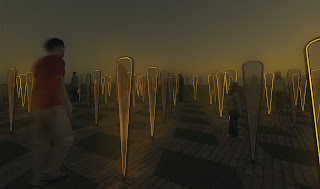 The Rose Kennedy Greenway is a thin ribbon of urban landscape that outlines the edge of Boston’s Financial District.  The Greenway consists of a series of mini parks that are interconnected by a series of paths.  Each park is slightly different from the next; some sections have fountains, while others have benches and wide swatches of grass.  The Greenway sits on top of Interstate 93 and is the result of Boston’s Big Dig. Because of the park’s busy location and minimal space, it does not attract many visitors.  Since the parks opening in 2004, there have been many suggestions on how to make the Greenway more useful and appealing to visitors.  Anthony Di Mari of Boston has come up with a green design that he thinks will bring more visitors to the park as well as, make better use of the space.

Di Mari has designed a self-sufficient network of wind breakers that will use wind energy to irrigate a portion of the park.  He chose to focus on the portion of park closest to South Station because of its ideal wind currents. The intent of the project is to absorb water and moisture, convert the kinetic energy of the wind into electricity that could power LED lights, and passively pump water through an irrigation system.  He calls his design, the Urban Field. Given the site’s exposure to different wind patterns and its urban setting, Di Mari feels that the Greenway is a suitable testing platform for the Urban Field.

His proposal consists of a network of small and large wind breakers set in the South Station park section.  The design takes into account the average wind direction and speed of the designated area.  Both types of wind breakers will be arranged and angled to best engage with the wind. The unique design of the wind breakers will further help to maximize the network’s ability to harness the full power of the wind. The smaller, lower components will line the edge of the field and respond to the lower surface wind currents.  As these lower components oscillate, they pump water stored below the surface and irrigate the field. The design and placement of these edge components will allow wind to enter the inner area of the field where the large wind breakers will be placed.  They will not only passively pump water through the irrigation system, will but also produce a flickering glow through the generation of piezoelectricity.  Piezoelectricity is the ability of certain crystals to produce a voltage when subjected to mechanical stress.  As the large component moves, a sensor is triggered and generates a charge for LED lights that will intermittently light the area of the field. 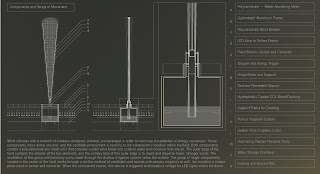 The beauty and design of Di Mari’s proposal serves a purpose. He hopes to prove that the flat, open spaces of the Greenway can be much more than just a plot of grass that lines a cityscape.  The Urban Field challenges urban green space to be both functional and interactive.  Di Mari’s design would allow the landscape to sustain itself while also providing for a unique experience for Greenway visitors.

The systematic approach of the Urban Field makes the design flexible, allowing it to be adjusted to fit any type of setting.  If successful on the Greenway, the Urban Field can be easily replicated and used to help keep parks active and healthy in a self sustaining manner.   We look forward to seeing a more constructive use of the Greenway and hope to see the Urban Field in Boston soon!